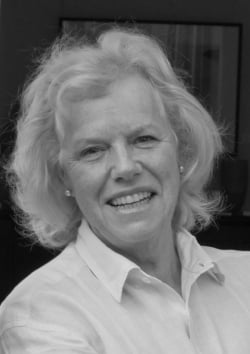 Joanna Bird originally trained as a potter for three years with Michael Cardew and practiced in her own right, before setting up a contemporary ceramics gallery in 1994. Over the last three decades she has built an international reputation in ceramics and sought out fine works which have been acquired by Museums and Collectors worldwide. As a leading ceramics and glass expert, Joanna specialises in commissions on all scales, especially installations.

Joanna represents a broad stable of ceramic and glass artists, showing their work in the company of important historic Collectors’ pieces at selected London and international galleries, Art Fairs, and at her own gallery.

In 2012 Joanna set up the Joanna Bird Foundation, with a mission to support emerging talents in the decorative arts, nurturing education and exploring new concepts within the wider field of the arts. The foundation’s first touring exhibition ‘Marking the line: Ceramics and Architecture’ was supported by Arts Council England. This groundbreaking show was designed as a life-specific concept touring three venues of particular architectural and historical interest, including Sir John Soane’s Museum, London, Port Eliot, Cornwall and Pitzhanger Manor, Ealing. As well as curating the exhibition, Joanna organised a symposium at Somerset House debating the interplay between the disciplines of ceramics and architecture, an area that is of particular interest to her.

Two years before the death of acclaimed potter Richard Batterham, the Foundation commissioned and produced the film ‘Richard Batterham: Master Potter’ (2017), recording his dedicated life and work. The film has had over 55,000 viewings and is soon to be shown at the V&A Museum in connection with the exhibition of Batterham’s work presently on display.

Joanna has written for national magazines on the importance of ceramics and lectures in both the UK and abroad.

Joanna provides an expert consultancy service to many high profile clients. Collectors who have used her expertise frequently return for further ideas – from both Joanna herself and the exciting contemporary artists with whom she works.
Joanna and her team can assist with the collation, valuation, arrangement and reshaping existing collections, as well as advising on how best to make complementary additions to enhance and increase the value of a collection.

From the outset, Joanna has bought and sold work from the Studio Pottery movement, and advised on the condition and authenticity of works. Her aesthetic interests and expertise extend to other periods too, particularly where this informs the development of the Studio Pottery style.

Joanna has an extensive knowledge of paintings and can also advise on the display of varied works of art in the same setting. She has assisted in building some notable collections, and in giving clients the satisfaction of living with the best ceramic art.

Every show that Joanna Bird presents is curated by Joanna herself, using the strong aesthetic sense and ‘eye’ that she has developed over the years. She is at present working on a key exhibition on the art of ceramics installation.